Share with the community your stories and anecdotes of using ITK during the past ten years.

This is an informal forum.

Short stories with funny connotation are more than welcome.

ITK: To Infinity and Beyond!

A highly experienced medical image processing guru told me about ITK (and VTK) in 2002.

I found myself intrigued by the promise an API which would provide a foundation to allow open source research and development developer's create cutting edge applications.

Ever since, I've been impressed by the consistency and power of this API, the strength of the open source developer community and the rapid collaborative feature implementation and bug fixing. (Itk,Vtk, Paraview, Volview and Igstk to name a few).

One particular area which I was hoping to get more insight into was the set of optimization techniques, part of ITK's libraries, which received a major upgradein ITK release 3.14.

Thanks to Kitware for providing a platform for innovation!

ITK Experiences at UNC, the CADDLab

CMake, the only good thing to come from ITK?

From Hans Johnson at the University of Iowa:

That night, as the nightly builds started to appear, the dashboard was littered with compilation errors. Here is the e-mail I sent to the developers at 10:32 PM.

I also sent a personal e-mail to the fellow that checked in the code that "wreaked the havoc." My tone was a bit stronger. That was the first and last day he checked in code. To this day, I still feel bad about that e-mail.

The next giraffe is on me 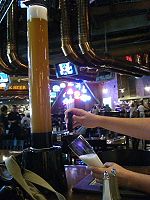 The ITK contractors met at least once a year at the National Library of Medicine in Bethesda. Jim Miller and I usually had dinner the night before in a pub called the Rock Bottom Brewery. The food was pretty good, but the beer was the highlight. They brew their own and had a nice selection of ales and lagers. One night Jim and I both happened to order the same beer before dinner.

The waiter asked, "Since you are both having the same beer why not get a 'carafe'? It is quite a bit cheaper." Sounded good so we did.

He came back shortly with a tall cylinder filled with 2.5 liters of beer and a tap on the bottom. 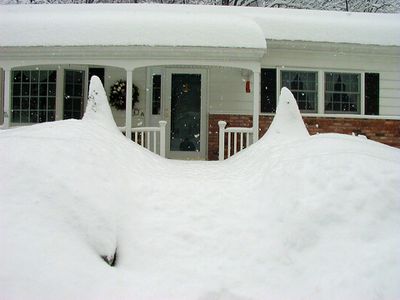 January 4, 2003. MAJOR NOR'EASTER, day 1: This was a long duration storm beginning in the morning with periods of light to moderate snow through the day, snow became moderate to heavy late in the day and continued that way through midnight, snowfall rates were highly variable through the storm, at times reaching 2" per hour, wind was not strong, the 12" of snow at Albany was enough to set a 24 hour snowfall record for this date. MAJOR NO'REASTER, day 2: Moderate to heavy snow became more light to moderate and patchy after 3:00am, but continued off an on through the entire day, wind remained light, the 1.51" of melted precipitation was good for a new 24 hour record for this date, the 8.8" of snow was also good for a new 24 hour snowfall record for this date at Albany.

In early February 2003 we met at the University of Pennsylvania. Jim Gee was the host. The evening before the meeting, Philadelphia received so much snow (1.2 inches according to PhillyWeather.net) that the city came to a screeching halt. The University pretty much shut down. Fortunately, we were able to use the building that hosted the meeting. I recall the meeting being successful and we all enjoyed our stay in the City of Brotherly Love.

After the two day meeting, we returned home without incident. I sent Jim Gee the following e-mail with an attached image:

NOTE: The week after our meeting, the northeast experienced The Blizzard of 2003. I assume that our little e-mail exchange had no influence on that event. The NOAA site reports that:

In the summer of 2001, I was invited to give a talk at the National Library of Medicine (NLM) Board of Regents Meeting. This would be the first presentation to NLM upper management on the Insight Toolkit. The scheduled date for the meeting was September 12, 2001. My plane reservation was for 11:30AM on September 11. Of course I never made that trip because of the attack on the World Trade Center. At GE we were gathered for our morning dashboard reviews of VTK and ITK. My wife called to say that a plane had flown into one of the toweres of the World Trade Center in New York.

Needless to say, as events unfolded in the next few minutes, my flight to Washington DC was cancelled. In the notes for the NLM Board of Regents on September 12 the chilling comments:

The meeting ended early because of the attacks on the World Trade Center and Pentagon.

Dr. Lindberg had just begun his presentation when notification was made that the NIH was closing due to the attacks on the Trade Center and the Pentagon.

My presentation was rescheduled for February 12, 2002. At the February meeting I described the ITK software and the our successful collaborations between industry and academia. I proudly described how ITK could run on PC's and workstations. And how we tested the system nightly on Sun computers, Silicon Graphics, and a range of personal computers.

Dr. Lindberg, the Director of NLM, asked "Does ITK run on the Macintosh?"

I paused, since Terry Yoo had informed me that Dr. Lindberg was a big Mac user.

"None of the contractors have Macs", I said.

Although Dr. Lindberg enjoyed the talk. And he specifically commented on how he was impressed with our multi-institution collaboration. I think he was disappointed that ITK did not run on the Mac.

Of course, today, the Mac is a well-supported platform. The initial port to the Mac was done by one of ITK's early adopters, shortly after that meeting. I believe he was Jon Harald Kaspersen from SINTEF.

Luis: What were you thinking?

GE Research hosted a Visible Human Segmentation and Registration Toolkit Architecture Meeting from January 19-21, 2000 in Niskayuna, NY. This was the first working meeting of the ITK contractors.

Stephen was the PI from UNC and Luis accompanied him.

Here is the weather report for Albany, NY on those three days. Please note that all temperatures are degrees Fahrenheit.

This was a very enlightening meeting. I learned about the dark arts of driving on the snow-covered and icy roads.

And it's checked in!

I recall three things from this meeting.

Are you with the Ackerman Wedding?

At every contractor meeting, we tried to arrange an evening dinner for the whole group. This was a chance to meet and get to know each other outside of the formal meetings. Socializing is a huge part of any multi-group project. Wherever we met, we delegated the group evening mealk to the local hosts. Dr. Ackerman was our designated social chairman when we met in Bethesda. Several times we had dinner at Trattoria Sorrento. Dr. Ackerman was able to arrange a special menu for us. This was an efficient way to handle a large number of guests. At least once, as I recall, we were presented with the "Ackerman Wedding Menu". The restaurant always placed us in our own area of the restaurant. These were the best meals and social events of our many ITK evening meals.