Typically, when a client disconnects, the server process terminates. Thus, for the server to do any processing, a(the) client must be present. This becomes cumbersome especially when generating large animations, since now it is required that the client remains alive till the entire animation is generated. ParaView3 supports a mode in which it is possible for the client to disconnect from the server and then tell the server to generate and save an animation. The server generates the animation and then exits. This document describes the UI and the internal design for the same. 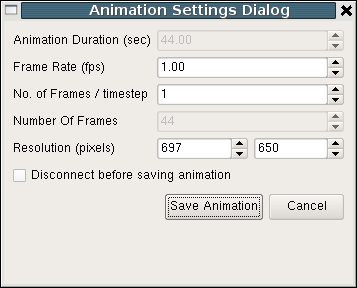 Animation Settings Dialog is shown when user selects Save Animation from the File menu. The Disconnect before saving animation check-box is enabled only when connected to a server process.