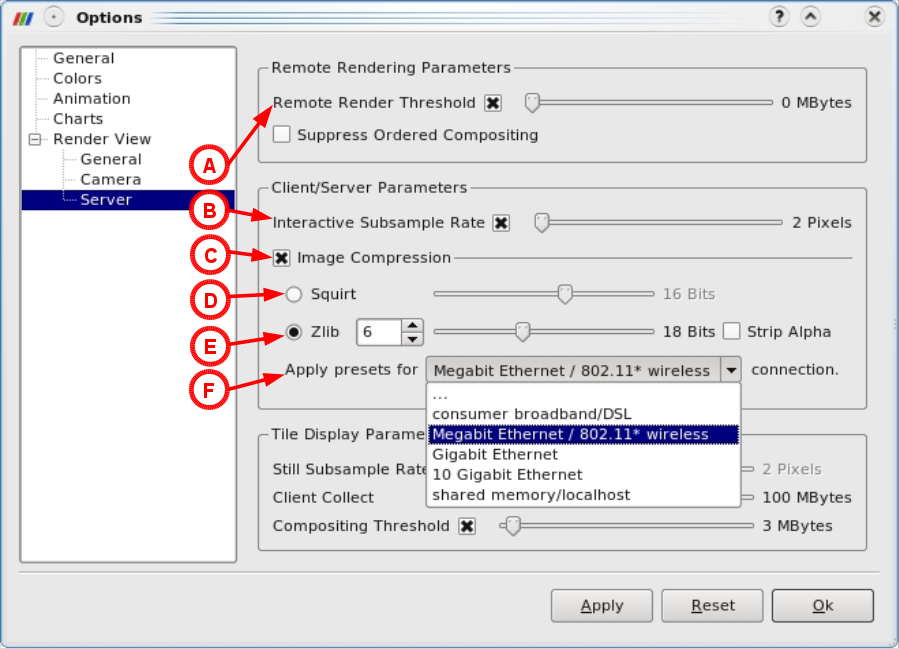 When image compression is enabled, the Zlib image compressor, can be selected and configured here. Zlib is public domain implementation of DEFLATE, the scheme originally used in pkzip. This is a loss-less compression scheme that works well on images and has been used in png image standard. The algorithm has fixed memory requirements independent of input data size, and never inflates data. At its highest settings the Zlib compressor achieves compression ratios an order of magnitude or so higher than Squirt. The trade off, is as is often the case, speed as runtime for zlib compressor is an order of magnitude longer than Squirt. However, when connecting to a ParaView server over a network the runtime is much smaller than the image delivery time and as a result one can see an improvment in framerates by using the Zlib compressor.

The Zlib compressor has a number of configuration options. The first setting is Level and can be selected by using the spin box. This is a number between 1 and 9, where level 1 sacrifices compression ratio to achieve faster run time, and level 9 sacrifices runtime to acheive higher compression ratio. The second setting is the colorspace. This setting is selected using the slider. There are 5 settings available ranging from 24 bits-per-pixel to 9 bit-per-pixel. Unlike Squirt the Zlib colorspace reduction algorithm introduces new colors in the decompressed image, and the lower colorspace settings produce significant color changes in the decompressed image. For this reason it is recommended not to go bellow 15 bits-per-pixel. The colorspace reduction is performed in a pre-compression pass, which imposes a performance and memory penalty. For these reasons it's use is only recommended on relatively slower networks. Finally, the Strip Alpha setting can be used to reduce the image size by removing the alpha channel prior to compression. If selected this setting is applied during the colorspace reduction and has a similar performance and memory hit. For these reasons it's use is only recommended on relatively slower networks.

The following chart show typical performance characteristics of the compressors when configured using the Compressor Pre-sets drop down menu in comparison to using no compression at all. Note that the configurations used for these tests make use of the recommended settings, rather than settings that would give optimal results. The test consisted of an image produced using the Hierarchical Fractal source and forcing 200 interactive renders using ParaView's Play Test feature. The results, presented in the following histograms and table, are organized by network and compressor. Three networks have been employed. The first row of results was taken on localhost connection running both ParaView client and server on a 2 x 2.5GHz Core 2 Quad with 32 G of ram and a Quadro FX 3700 video board. The second row of results was taken running ParaView client on the same workstation while running the server on a 2.6 Ghz Core 2 notebook with 4 G of ram and an GeForce 9800M GS video board over a 100 Mb lan. The third row of results was taken on with the client running on the same workstation and the server running on a compute node of UCSD's cluster nashi over a broadband connection and a 1 hop ssh tunnel. While this doesn't make for a good comparison of the compressors themselves on technical grounds, it does provide useful information about the overall system performance in typical use cases. Testing that illustrates isolated compressor performance can be found here.