Difference between revisions of "ParaView/Python Scripting"

ParaView offers rich scripting support through Python. This support is available as part of the ParaView client (paraview), an MPI-enabled batch application (pvbatch), the ParaView python client (pvpython) or any other Python-enabled application. Using Python, users and developers can gain access to the ParaView engine called Server Manager.

To start interacting with the Server Manager, you have to load the servermanager module. This module can be loaded from any python interpreter as long as the necessary files are in PYTHONPATH. These files are the shared libraries located in the paraview binary directory and python modules in the paraview directory: paraview/servermanager.py, paraview/vtk.py etc. You can also use either pvpython (for stand-alone or client/server execution), pvbatch (for non-interactive, distributed batch processing) or the python shell invoked from Tools -> Python Shell using the ParaView client to execute Python scripts. You do not have to set PYTHONPATH when using these. In this tutorial, I will be using the python integrated development environment IDLE. My PYTHONPATH is set to the following.

This is on my Mac and using the build tree. In IDLE, let’s start by loading the servermanager module.

Note: Importing the paraview module directly is deprecated although still possible for backwards compatibility. This document refers to the servermanager module alone. Next, we need to connect to a server if we are not already connected.

In this example, we connected to the built-in server. When using pvbatch, this is the only connection mode supported, even when pvbatch is running as an MPI task. When running pvpython or loading servermanager from an external python interpreter, we can also connect to a remote server as shown in the following example

This assumes that you already started the server (pvserver) on the local machine. Note: Connect() returns a connection object on success and returns None on failure. You might want to check the return value to make sure connection succeeded.

Note: When importing the servermanager module from the application’s python shell, Connect() should not be called as a connection already exists.

When first loaded, the servermanager module creates several sub-modules that can be used to create a visualization. The most important ones are listed below.

You can get a list of classes these modules contain by using dir() as shown in the following example.

The object assigned to coneSource is a proxy for the actual vtkConeSource. This proxy provides a set of properties and methods to control the behavior of the underlying VTK object(s). These objects may be in the same process (built-in server) or on one or more server processes (distributed remote server). The proxy will handle communication with the VTK objects in a transparent way. You can get some documentation about the proxy using help().

This gives you a full list of properties. Let’s check what the resolution property is set to.

You can increase the resolution as shown below.

Alternatively, we could have specified a value for resolution when creating the proxy.

You can assign values to any number of properties during construction using keyword arguments. Let’s also change the center.

Vector properties such as this one support setting and getting of individual elements as well as slices (ranges of elements).

Next, let’s apply a shrink filter to the cone:

At this point, if you are interested in getting some information about the output of the shrink filter, you can force it to update (which will also cause the execution of the cone source. For details about VTK pipeline model, see one of the VTK books.

We will cover the DataInformation class in more detail later.

Oops, nothing is visible. We need to reposition the camera to contain the entire scene. 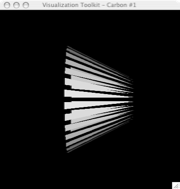 The paraview.servermanager module contains several Python classes designed to be Python-friendly as well as all classes wrapped from the C++ Server Manager library. The most important classes are as follows.

We will cover these classes in detail in following sections. When first loaded, the servermanager module creates several sub-modules. The most important ones are as follows.

These modules are automatically populated (at load time) with various Proxy sub-classes as defined in the Server Manager configuration files (ParaView3/Servers/ServerManager/Resources/*.xml). This allows direct instantiation of actual Proxy sub-classes (for example, SphereSource) instead of having to use vtkSMProxyManager::CreateProxy(). Furthermore, the documentation for each class can be obtained using help().

Connecting to a Server

Unless you are using the Python shell that is in the paraview application, the first step to any Server Manager Python script is connecting to a server. Even when running in stand-alone mode, you have to connect to a built-in server. To connect to a server, use servermanager.Connect(). This method takes 4 arguments, all of which have default values.

When connecting to the built-in server and running pvbatch, do not specify any of these arguments. The default values work well.

When connecting to a hybrid server (pvserver), specify only the first 2 arguments. These are the server name (or IP address) and port number.

When connecting to a data-server/render-server pair, you have to specify all four arguments. The first 2 are the host name (or IP address) and port number of the data server, the last 2 those of the render server. Here are some examples.

Note: Connect() will return None on failure. To be safe, you should check the return value of Connect().