You can establish connections between the independent programs that make up parallel ParaView from within the client’s user interface. The user interface even allows you to spawn the external programs and then automatically connect to them. Once you specify the information that ParaView needs to connect to, or spawn and connect to, the server components, ParaView saves it to make it easy to reuse the same server configuration at a later time.

The Choose Server dialog shown below is the starting point for making and using server configurations. The Connect entry on the ParaView client’s File menu brings it up. The dialog shows the servers that you have previously configured. To connect to a server, click its name to select it; then click the Connect button at the bottom of the dialog box. To make changes to settings for a server, select it, and click Edit Server. To remove a server from the list, select it, and click Delete Server.

To configure a new server connection, click the Add Server button to add it to the list. The dialog box shown below will appear. Enter a name in the first text entry box; this is the name that will appear in the Choose Server dialog (shown above).

Next select the type of connection you wish to establish from the Server Type menu. The possibilities are as follows. The “reverse connection” entries mean that the server connects to the client instead of the client connecting to the server. This may be necessary when the server is behind a firewall. Servers are usually run with multiple processes and on a machine other than where the client is running.

When all of these values have been set, click the Configure button at the bottom of the dialog. This will cause the Configure Server dialog box, shown below, to appear. You must first specify the startup type. The options are Command and Manual. Choose Manual to connect to a server that has been started or will be started externally, on the command line for instance, outside of the ParaView user interface. After selecting Manual, click the Save button at the bottom of the dialog.

Figure 3. Configure the server manually. It must be started outside of ParaView.

If you choose the Command option, in the text window labeled Execute an external command to start the server:, you must give the command(s) and any arguments for starting the server. This includes commands to execute a command on a remote machine (e.g., ssh) and to run the server in parallel (e.g., mpirun). You may also specify an amount of time to wait after executing the startup command(s) and before making the connection between the client and the server(s). (See the spin box at the bottom of the dialog.) When you have finished, click the Save button at the bottom of the dialog.

Figure 4. Enter a command that will launch a new server.

Clicking the Save button in the Configure Server dialog will return you to the Choose Server dialog (shown earlier in this section). The server you just configured will now be in the list of servers you may choose. Thereafter, whenever you run ParaView you can connect to any of the servers that you have configured. You can also give the ParaView client the –-server=server_config_name command-line argument to make it automatically connect to any of the servers from the list when it starts.

As mentioned in the introduction to this chapter, it is often useful to visualize data that physically resides on a computer other than the one driving the visualization. Instead of copying the data to the local workstation, a ParaView server can be run on the remote computer(s), and a ParaView client can be run on the local workstation. The two programs communicate to create a single ParaView session. The server loads and processes the data, and the client creates and displays the graphical user interface that allows the user to interact with the data.

You can run pvserver as a serial process on a single machine. If ParaView was compiled with parallel support, you can also run it as an MPI parallel program on a group of machines. Instructions for starting a program with MPI are implementation- and system-dependent, so contact your system administrator for information about starting an application with MPI. With the MPICH implementation of MPI, the command to start the server in parallel usually follows the format shown here.

By default, pvserver will start and then wait for the client to connect to it. To make the connection, select Connection from the File menu, select (or make and then select) a configuration for the server (described in section 1.2), and click Connect. Note that you must start the server before the client attempts to connect to it.

The client-to-server connection is made over TCP, using a default port of 11111. If your firewall puts restrictions on TCP ports, you may want to choose a different port number. In the client dialog, simply choose a port number in the Port entry of the Configure New Server dialog. Meanwhile, give pvserver the same port number by including --server-port (or –sp)in its command-line argument list.

An example command line to start the server and have it initiate the connection to a particular client on a particular port number is given below.

There are two sets of connections that must be made for ParaView to run in render-server mode. The first connection set is between the client and the first node of each of the data and render servers. The second connection set is between the nodes of the render server and the first N nodes of the data server. Once all of these connections are established, they are bi-directional. The diagram in Figure 5 depicts the connections established when ParaView is running in render server mode. Each double-ended arrow indicates a bi-directional TCP connection between pairs of machines. The dashed lines represent MPI connections between all machines within a server. In all the diagrams in this section, the render server nodes are denoted by RS 0, RS 1, …, RS N. The data server nodes are similarly denoted by DS 0, DS 1, …, DS N, …, DS M. 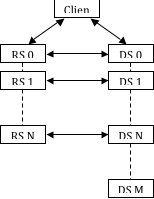 Start ParaView and select Connect from the File menu to open the Choose Server dialog. Select Add Server to open the Configure New Server dialog. Create a new server connection with a Server Type of Client / Data Server / Render Server. Enter the machine names or IP addresses of the server machines in the Host entries. Select Configure, and then in the Configure Server dialog, choose Manual. Save the server configuration, and Connect to it. At this point ParaView will establish the two connections. This is similar to running ParaView in client/server mode but with the addition of a render server.

The connection between the client and the servers can also be initiated by the servers. As explained above, this is useful when the servers are running on machines behind a firewall. In this case, the client must be waiting for both servers when they start. The diagram indicating the initial connections is shown in Figure 7.

Figure 7. Reversing the connections between the servers and the client.

To establish the connections shown above, start by opening the Configure New Server dialog on the client. Choose Client / Data Server / Render Server (reverse connection) for the Server Type in the Configure New Server dialog. Next, add both --reverse-connection (or -rc) and --client-host (or -ch) to the command lines for the data server and render server. The value of the --client-host parameter is the name or IP address of the machine running the client. You can use the default port numbers for these connections, or you can specify ports in the client dialog by adding the --data-server-port (or –dsp) and --render-server-port (or –rsp) command-line arguments to the data server and render server command lines, respectively. The port numbers for each server must agree with the corresponding Port entries in the dialog, and they must be different from each other. 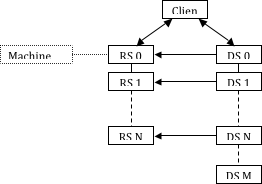 Figure 8. Initializing the connection from the data server to the render server.

An example network configuration file, called machines.pvx in this case, is given below.

Sample command-line arguments that use the configuration file above to initiate the network illustrated in Figure 8 are given below.

In the machines file above, the render-node-port entry in the render server’s XML element tells the render server the port number on which it should listen for a connection from the data server, and it tells the data server what port number it should attempt to contact. This entry is optional, and if it does not appear in the file the port number will be chosen automatically. Note that it is not possible to assign port numbers to individual machines within the server; all will be given the same port number or use the automatically chosen one. Note also that each render server machine is given a display environment variable in this file. This is not required to establish the connections, but it is helpful if you need to assign particular X11 display names to the various render server nodes. 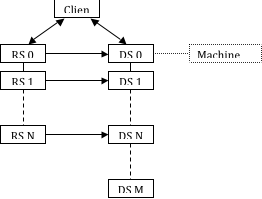 Figure 9. Reversing the connection between the servers and client and connecting the render server to the data server.