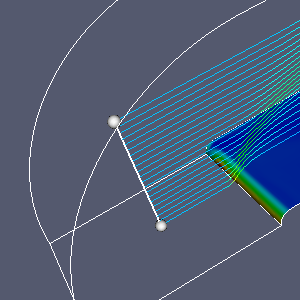 [[Image:]]The plane widget is used in clipping and cutting. The plane can be moved parallel to its normal by left-clicking on any point on the plane except the line center and dragging. Right-clicking on the plane (except on the normal line center) and dragging scales the plane widget. Upward mouse motion increases the size of the plane; downward motion decreases it. The plane normal can be changed by manipulating one of the point widgets (displayed as cones that become red when clicked) at each end of the normal vector.

[[Image:]]The point widget is used to set the position of a point or the center of a point cloud. It is used by both the Stream Tracer, Probe Location and Probe Location over Time filters. The position of the point can be changed by left-clicking anywhere on it and dragging. Right-clicking and dragging anywhere on the widget changes the size of the point widget in the scene. To position the widget accurately, the user may need to change the camera position as well. Holding the Shift key while interacting will restrict the motion of the point to one of the x, y or z planes. (The plane chosen is the one that is most closely aligned with the direction of the initial mouse movement.)