From KitwarePublic
< TubeTK
Jump to navigationJump to search
The printable version is no longer supported and may have rendering errors. Please update your browser bookmarks and please use the default browser print function instead.

The following document is a description of the accepted coding style for TubeTK. Developers who wish to contribute code to TubeTK should read and adhere to the standards described here.

This document is organized into the following sections:

This style guide is an evolving document. Please confer with the TubeTK development team if you wish to add, modify, or delete the rules described in these guidelines.

The following coding-style guidelines are to be used in development of the TubeTK. To a large extent these guidelines are a result of the fundamental architectural and implementation decisions made early in the TubeTK project. For example, the decision was made to implement TubeTK with a C++ core using principles of generic programming, so the rules are oriented towards this style of implementation. Some guidelines are relatively arbitrary, such as indentation levels and style. However, an attempt was made to find coding styles consistent with accepted practices. The point is to adhere to a common style to assist developers and users of the future learn, use, maintain, and extend TubeTK.

Please do your best to be a upstanding member of the TubeTK team. The rules described here have been developed with the team as a whole in mind. If you consistently violate these rules you will likely be harassed mercilessly, first privately and then publicly. If this does not result in correct code layout, your right to Git write access (if you are developer and wish to contribute code) may be removed. Similarly, if you wish to contribute code and are not a developer, your code will not be accepted until the style is consistent with these guidelines.

The following implementation strategies have been adopted by the TubeTK team. These directly and indirectly affect the resulting code style. Understanding these strategies motivate the reasons for many of the style guidelines described in this document.

The core implementation language is C++. C++ was chosen for its flexibility, performance, and familiarity to team members. The toolkit uses the full spectrum of C++ features including const and volatile correctness, namespaces, partial template specialization, operator overloading, traits, and iterators.

Generic Programming and the STL

Compile-time binding using methods of generic programming and template instantiation is the preferred implementation style. This approach has demonstrated its ability to create efficient, flexible code. Use of the Standard Template Library (STL) is encouraged. In contrast with many libraries, STL containers are the acceptable for passing collections of data between public and private member functions. The STL is typically used by a class, rather than as serving as a base class for derivation of classes.

Most applications as well as the core of the toolkit are designed to compile on a set of target operating system/compiler combinations. These combinations are:

Some applications and modules make use of specific GPU configurations to optimize certain calculations. These vary according to system, but there shall always be an unoptimized implementation that will comply to the above portablity standards.

TubeTK makes extensive use of both the Visualization Toolkit (VTK) and the Insight Toolkit (ITK). Image processing features added to TubeTK should prefer ITK constructs over those of VTK. When visualization-geared code is written for TubeTK, VTK should be favored.

TubeTK is intended to be use in conjunction with 3D Slicer, version 4. TubeTK Modules conform to the execution model used by the 3D Slicer project. For more information regarding bundling 3D Slicer extensions see the 3D Slicer documentation pages.

The TubeTK build environment is CMake. CMake is an open-source, advanced cross-platform build system that enables developers to write simple makefiles (named CMakeLists.txt) that are processed to generated native build tools for a particular operating system/compiler combinations. See the CMake web pages at for more information.

Because of the agile nature of TubeTK developement, the TubeTK team uses developement versions of CMake, ITK, VTK, 3D Slicer, along with a recent stable version of Qt.

These are the most important factors influencing the coding style found in TubeTK. Now we will look at the details.

Classes are created and organized into a single class per file set. A file set consists of .h header file, .cxx implementation file, and/or a .hxx templated implementation file. Helper classes may also be defined in the file set, typically these are not visible to the system at large, or placed into a special namespace.

Source files must be placed in the correct directory for logical consistency with the rest of the system, and to avoid cyclic dependencies. The TubeTK source directory structure is divided into several directories below TubeTK. Please consult the TubeTK team before creating any new directories with TubeTK. Directories containing source are arranged as follows:

Depending on whether the name is a class, file, variable, or other name, variations on this theme result as explained in the following subsections.

In this formula, the name of the algorithm or process (possibly with an associated adjective or adverb) comes first, followed by an input type, and completed by a concept name. A concept is an informal classification describing what a class does. There are many concepts in TubeTK, here are a few of them:

The naming of classes is an art form; please review existing names to catch the spirit of the naming convention. Example names include:

Modules created within TubeTK should be named in the same manner ascribed to other TubeTK classes. The directories that the modules are constructed in should end in Module as well as the shared library build of the module. However, the standalone version of the module should omit Module from its name.

Files should have the same name as the class, with the namespace of the library prepended (e.g., tube). Header files are named .h, while implementation files are named either .cxx or .hxx, depending on whether they are implementations of templated classes. It is important to note that VTK, ITK, and Qt classes fall under their respective namespaces and do not use the tube namespace.

Class data members are prepended with m_ as in m_Size. This clearly indicates the origin of data members, and differentiates them from all other variables.

Local variables begin in lowercase. There is more flexibility in the naming of local variables; please remember that others will study, maintain, fix, and extend your code. Any bread crumbs that you can drop in the way of explanatory variable names and comments will go a long way towards helping other developers.

Typedefs are absolutely essential in generic programming. They significantly improve the readability of code, and facilitate the declaration of complex syntactic combinations. Unfortunately, creation of typedefs is tantamount to creating another programming language. Hence typedefs must be used in a consistent fashion.

The general rule for typedef names is that they end in the word Type. For example:

However, there are many exceptions to this rule that recognize that TubeTK has several important concepts that are expressed partially in the names used to implement the concept. An iterator is a concept, as is a container or pointer. These concepts are used in preference to Type at the end of a typedef as appropriate. For example:

Here Container is a concept used in place of Type.

Do not use them. The only exception is when defining preprocessor variables and macros (which are discouraged). In this case, underscores are allowed to separate words.

Shadowed parameters are particularly troublesome in that they often indicate code errors and ambiguities. Again, warnings are treated as errors, and shadowed variables will generate warnings.

A common mistake is to give a variable larger scope than what it needs. To avoid this, define loop variables in the loop declaration:

New Line at End of File

Some compilers will complain (generate a warning/error) if a file does not end with a new line. To be safe, make sure each file ends with a blank line.

All classes that do not inherit from VTK, ITK, or Qt classes should be placed in the tube namespace.

Const correctness is important. Please use it as appropriate to your class or method.

Indicate that methods throw exceptions in the method declaration as in:

The following are the accepted TubeTK code layout rules and indentation style. After reading this section, you may wish to visit many of the source files found in ITK. This will help crystallize the rules described here.

Each line of code should take no more than 80 characters. Break the code across multiple lines as necessary. Use lots of whitespace to separate logical blocks of code, intermixed with comments. To a large extent the structure of code directly expresses its implementation.

The appropriate indentation level is two spaces for each level of indentation. Do not use tabs. Set up your editor to insert spaces. Using tabs may look good in your editor but will wreak havoc in someone else's. 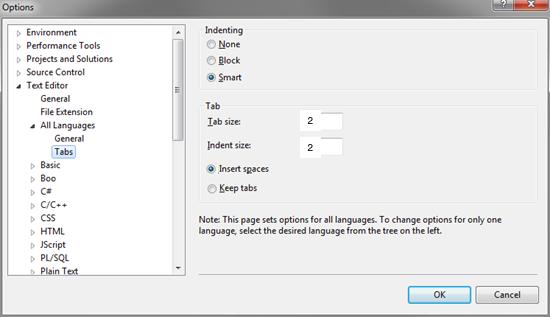 TubeTK, like ITK, makes liberal use of spaces to improve the readability of code. When in doubt, use a space. Common examples:

Break complex methods into multiple lines. Program in a way that makes it easy for your code to be debugged by others. Examples:

Methods are defined across multiple lines. This is to accommodate the extremely long definitions possible when using templates. The starting and ending brace should be indented. For example:

The first line is the template declaration. The second line is the method return type. The third line is the class qualifier. And the fourth line in the example above is the name of the method.

Braces must be used to delimit the scope of an if, for, while, switch, or other control structure. Braces are placed on a line by themselves:

or when using an if:

Use of vnl and accessing vnl matrix and vector elements

When accessing vnl_vector elements, parenthesis or brackets may be used - typically dictated by code flow / context.

Doxygen is an open-source system for automatically generating documentation from source code. To use Doxygen effectively, the developer must insert comments, delimited in a special way, that Doxygen extracts to produce the documentation. While there are a large number of options to Doxygen, developers at a minimum should insert the following Doxygen commands.

Classes should be documented using the \class and \brief Doxygen commands, followed by the detailed class description:

The key here is that the comment starts with /**, each subsequent line has an aligned *, and the comment block terminates with a */.

Before each product release, a battery of testing (specified on the project wiki) will be carried out to check for regressions not caught by traditional unit testing. Release version naming convention:

Code coverage is responsibility of all developers.

Memory leaks must be plugged. A list of leaks and memory defects can be found on the Dashboard under the Dynamic Analysis section. Clicking on the Defect Count will show further information.

A script is available for Linux and OS X to help debug the memory leaks. It can generate the same output present on the dashboard on demand for a subset of tests. The command

shows full usage instructions. Essentially install valgrind and xsltproc, then execute the runValgrind.sh script from TubeTK-Build with arguments such as

Create a fork in your github account, and perform pull requests.