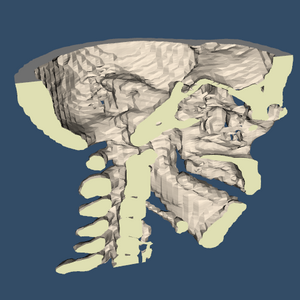 A clipped surface with generation of color scalars.

The main goal of this project is to make it possible to clip a surface, and then create a "cap" polygon (or polygons) that fill in the area that is enclosed by all the new edges that were created by the clipping. In other words, the goal is to close the surface after the clipping has been performed. For this purpose, a new filter called vtkClipClosedSurface has been created. 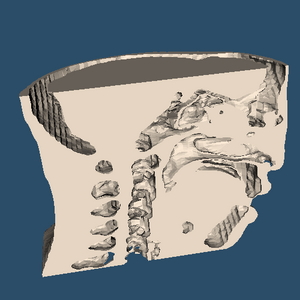 A skin isosurface with a reversed bone isosurface.

The vtkClipClosedSurface filter has the following features:

Note: an inside-out surface can be created by applying vtkReverseSense to a regular surface.

The input surface must satisfy these conditions:

The newly-created clip surfaces have the following limitations: 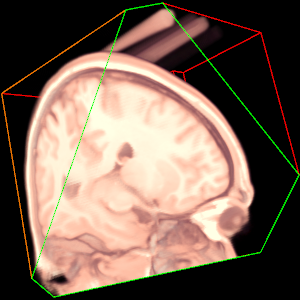 Clipping a cube and displaying the outline only.

Using SetScalarModeToColors or SetScalarModeToLabels will cause cell scalars to be generated so that the cut surfaces are displayed with a different color than the rest of the surface. Cell scalars are used instead of point scalars because the use of point scalars would require point duplication where the cut surfaces meet the rest of the surface. If GenerateOutline is on, then the lines will get the same scalar values as the faces.

If the ScalarMode is Colors, then three colors can be set:

The purpose of ActivePlaneColor is to color one cut plane differently, e.g. the plane that the user is interacting with. The ActivePlaneId can be set to specify which of the cut planes is the active plane.

Note that many VTK filters that create new cells (e.g. vtkStripper) will erase the cell scalars. So if you set ScalarMode, you should avoid using vtkStripper to post-process the data. 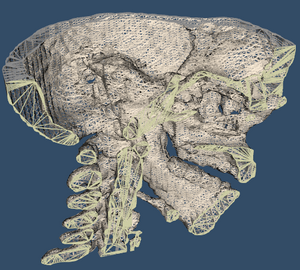 This filter uses many of the functions that are built into vtkCell and its subclasses, but it also has several internal functions for polygon manipulation. An overall description of what is done for each of the clipping planes is as follows:

Generation of the cut faces from the cut contours is a multi-step process:

This class would take a collection of contours (all within the same plane) and generate an appropriate set of polygons. Around half of the code in vtkClipClosedSurface could be put into this class with very little modification. This class would require the contours to be properly connected, so people would be advised to pass their line segments through vtkTriangleFilter before applying it.

This class would be used to do similar things as a constrained vtkDelaunay2D, but would not optimize the triangulation and would not be as sensitive to numerical instability.

This class could be responsible for generating just the cap polygons. On the other hand, this could be provided as an option of the current class.

Unfortunately, the only solution is to do both of these:

A partial solution is to use a tolerance for creating new points along clipped edges. When an edge is interpolated during the clipping process, if the new point is within tolerance of either of the edge end points, then that endpoint will be used instead of the new point (DONE). Also, if the clipped polygon is found to be degenerate, then the entire polygon can be removed at this stage so that it does not cause problems later.

Reducing the number of triangles produced

This class uses the clipping/contouring methods in the vtkCell subclasses, which triangulate polys while clipping or contouring them. This produces many more points and cells than are actually needed to describe the geometry. Also, when multiple cut planes are used, these cells can be clipped multiple times, causing a proliferation of small, sharp triangles.

There are two parts to the solution:

The ideal solution is to write clipping/contouring code that can deal with concave polygons. Then, in RequestData where the filter applies each clipping plane in sequence, the code can deal directly with the concave polygons produced by the previous clip-plane, and triangulation of the polygons can be deferred to the very end of RequestData. The result will be that the final output will have the minimum possible number of triangles.

The algorithm for creating new polygons assumes that all contours are closed. Currently, when a non-closed contour is found, it's two ends are connected in order to close it. This produces some odd results when the filter is given non-closed inputs.

There are three possible solutions:

The following heuristics have been added for joining the contours:

Only joins along the hull are permitted, since it is assumed that the loose ends are the result of contours that intersect the bounds of the data set.