From KitwarePublic
Jump to navigationJump to search
IN PROGRESS

ParaView has long supported basic camera animation. The user could specify camera position for different keyframes and ParaView would interpolate the camera orientation between keyframes during playback. However, due to the interpolation employed the camera ended up taking weird paths making it difficult to create simply animations such as rotating about an object of interest, zooming in on an area of interest etc. With ParaView 3.6 we have introduced new camera animation mechanisms that make such animation feasible. These can be considered as a precursor to more advanced camera animation capabilities that are to be expected in future releases.

This article describes a few simply use-cases to describe the user interface and work flow to setting up camera animations.

Revolving around an object of interest 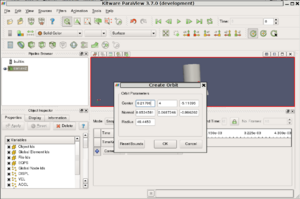 In this use-case, we simply want to create an animation where the camera makes a revolution about a central object (or objects).

Zooming on to an area of interest