The ParaView Spatio-Temporal Parallel Processing Tools are designed to dramatically reduce the running time of parallel data analysis jobs under certain conditions. These conditions include:

In the age of “big data”, dealing with the massive amount of data can be an enormous challenge. For our definition of big data with respect to scientific computing, we are going by the working definition of data that requires an inordinate amount of time to analyze to obtain salient information on an appropriate computing platform. Often when the analysis is separate from the computation (i.e. the simulation code producing the data), disk IO can be a significant factor. According to the DOE Exascale Initiative Roadmap, Architecture and Technology Workshop in San Diego in December 2009, for supercomputers there is expected to be a 500 fold increase in the FLOP/s between 2010 and 2018 but only a 100 fold increase in the IO bandwidth in that same time. Because of this we need to concentrate on ways to efficiently post-process simulation data generated on these leading edge supercomputers.

Note that the main advantage of this approach is that it escapes the typical limits of strong scaling for large amounts of processes where the computation per process gets overwhelmed by the communication per process. Similar results are obtained for weak scaling when the number of time steps analyzed is increased with process count while maintaining the same amount of work per time step. This is shown in the table below for results from the Parallel Ocean Program code (POP). Note that 1.4 GB of data is read in per time step and we compared using pure spatial parallelism (the time compartment size equal to the number of processes) and spatio-temporal parallelism with a time compartment size of 8. 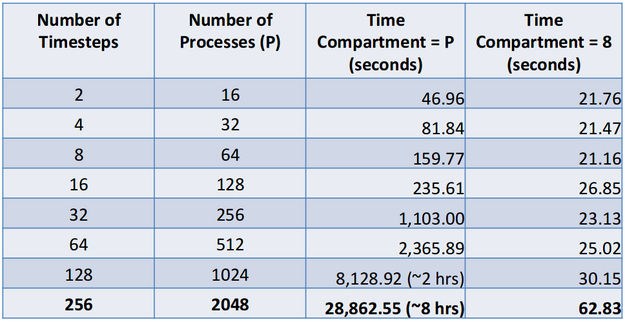 This was done on Los Alamos National Laboratory's Mustang supercomputer using 8 cores per node. A time compartment size of 8 is a reasonable value for this machine as long as the data fits on a single node. The reason for this is that it limits the inter-process communication to intra-node communication. While many analyses will be time step independent (i.e. time step A and time step B don’t need to share any information), we will also have cases where there is a global reduction operation. We have tested this for some temporal statistics (average, minimum, maximum and standard deviation) but a customized solution would need to be done for each global reduction operation.

The easiest way to create a new spatio-temporal pipeline script is to use ParaView’s GUI plugin. The directions are as follows:

Now that the script has been created, the user will need to transfer the script to the machine it is intended to be run on. If the path to the input and output files aren’t known a priori and set in step 4.4 above, they may need to be changed to match where it is found on the supercomputer. As there are many different ways to run a program built with MPI (e.g. mpirun, mpiexec, aprun, etc.), the user will have to look at the machine documentation to figure that out. We assume here that mpirun is being used in which case “mpirun -np <numprocs> <install path>/bin/pvbatch --symmetric <name and location of script>” is used to run the script.

We have submitted a paper to the 2013 LDAV conference. This paper develops a performance model on spatio-temporal parallelism and demonstrates its effectiveness at reducing run-time for analysis and visualization.

This work was done as part of the UV-CDAT project (http://uv-cdat.llnl.gov/) and was developed in collaboration with John Patchett and Boonthanome Nouanesengsy of Los Alamos National Laboratory.