The vtkCellPicker will shoot a ray into a renderer containing Actors, ImageActors, and Volumes, and will return information about the intersection of the ray with the objects. On Jan 25, 2009 the original Cell Picker, which had existed more-or-less unmodified for over a decade, was replaced by a new Cell Picker that offers enhanced functionality. For vtkVolume objects, it shoots a ray into the volume and returns the point where the ray intersects an isosurface of a chosen opacity. For vtkImageActor objects, it intersects the ray with the displayed slice. For vtkActor objects, it works like the original vtkCellPicker but also returns the closest point within the picked cell and enables the use of vtkCellLocators to speed up the pick. If the object's mapper has ClippingPlanes, then it takes the clipping into account, and will return the Id of the clipping plane that was intersected.

This new class is based on the vtkVolumePicker that was added to VTK cvs by David Gobbi of Atamai Inc. on November 25, 2009. It is part of VTK 5.6 and later releases. 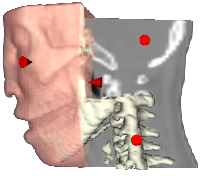 The new vtkCellPicker provides a superset of the functionality of the old vtkCellPicker and vtkPointPicker. The information it returns is as follows:

Since the pick is a ray-cast that is looking for surfaces in the data, another piece of information returned is:

The ray-cast will intersect any clipping planes that are used in the mappers, and will return:

For volumes, you should use the volume-enhanced vtkVolumePicker. It can also return:

Volume picking is achieved by shooting a ray through the volume and identifying an isosurface.

The actor picking works identical to the old vtkCellPicker with three exceptions:

The image pick simply intersects the displayed image slice. The normal of the slice plane is returned, in addition to the the point and cell information at the pick position.