This wiki has been deprecated. You can find updated information from the main VTK website.

Time support is now implemented in the VTK pipeline. It is documented in the following paper, which can be downloaded here.

The rest of this document provides the original design discussion of the time support. It is a bit out of date and left here for historical purposes.

Many visualization datasets and analysis codes deal directly with temporal data. Historically this has been a weak point in VTK with it having effectively no support for temporal data. Researchers from Sandia National Labs have provided a number of typical use cases that have been used to drive the requirements and design. This has led to a new framework for time in VTK along with it supporting classes and new filters.

Historically VTK and ParaView supported 'time', in that a couple readers support setting a timestep ivar when reading data files that have a notion of time (in particular, timesteps). And ParaView supports animations that show time sequences. However, there are many improvements, large and small, that need to be made. Below is a list of use cases sorted in terms of how significant they are for the user community right now.

Timesteps are point-samples of continuous time that are defined for a specific data set. They need not be contiguous or uniformly spaced, and in fact often aren't, since many simulations adjust their sample rate dynamically based on the simulation content. When more-than-one data set is present in a visualization, the timesteps in the data sets may represent completely different ranges and rates of time. Thus, it is important to have a single time "reference" that is uniform across all data sets. This document assumes that "time" is a continuous, absolute quantity represented as a real number, and that a "timestep" is an individual sample at a particular point in time.

Because time can vary continuously, it is possible to display a time for which there aren't any dataset timesteps that match. Behavior in this case can vary from displaying nothing or displaying the nearest timestep to interpolation of timestep data.

Playback of an animation means varying time, instead of varying timesteps. By sampling time at regular intervals, animations can play-back at the correct rate, even if the timesteps in a dataset don't represent regular intervals. When dealing with multiple datasets, the correct data can automatically be displayed, as long as the dataset timesteps share a common reference (if they don't, simple offset and scale transformations are trivial to implement and use). In the case of a single dataset, matching the animation sample points to the timesteps in the dataset can provide backwards-compatible behavior.

Previously, VTK assumed that the contents of the pipeline represent a single timestep. VTK's time support consisted of four main keys. TIME_STEPS is a vector of doubles that lists all the time steps that are available (in increasing order) from a source/filter. This is how a reader reports downstream what timesteps are available. Currently only a couple readers actually set this key. UPDATE_TIME_INDEX was a key that was used to request the data for a specific time index. The index corresponds to a index in the TIME_STEPS vector. DATA_TIME_INDEX and DATA_TIME are keys that indicate for a DataObject what index (int) and time (double) that data corresponds to.

This mechanism is limited in that it can only handle discrete time steps. But some analytical sources may be able to produce data for any time requested. To address this need a new information key will be created called TIME_RANGE that will define a T1 to T2 range of time that the source can provide. Likewise the old mechanism only allowed for requesting a single time step by index. This has the problem that some file formats are more efficient at returning multiple times steps at once, requesting by index creates confusion wrt branching filters.

To support these more flexible time requests involves first removing the old request mechanism to reduce complexity. To this end UPDATE_TIME_INDEX was removed as was DATA_TIME_INDEX. A new information key UPDATE_TIME_STEPS (a vector of doubles) was created that allows for requesting temporal data by time, as well as supporting requests for multiple time-steps at once. DATA_TIME_STEPS was added as a key to represent what time steps are in a temporal dataset. The result is that a temporal request will return a multiblock dataset with each time step being an independent dataobject. This will also support returning multiple time steps of multiblock data (multi-multi-block) To this end time support requires using the composite data pipeline executive. This executive has been reworked and extended to include time support.

Interpolation of time-varying data will be provided by filters written for that purpose; this would minimize the coding impact on sources (which can stay simple), and allows for different types of interpolation to suit user requirements / resources. Interpolation filters would be an example of a filter that expands the temporaral extents of a data request, just as a convolution image filter expands a request's geometric extents. Likewise a shift scale filter will be created that passes the data through but shifts and scales the time. This is useful for visualizing multiple datasets that while intended to be time aligned, are not so due to simple temporal origin and or scale issues.

One side effect of the above is that requesting the data for one cell across many timesteps would still be very slow compared to what it could be for a more optimized path. To address this need in the future we plan on creating a fast-path for such requests. This fast path will be implemented for key readers and the array calculator initially. It is still unclear exactly how this will be implemented. But it will effectively be a separate pipeline possibly connecting to a different output port. Another option is to have a special iformation request that rturns the data as meta-information as opposed to first class data.

With the above design in-place most operations on time agnostic filters will be handled by the executive which will loop the time steps through each filter. Time aware filters will be passed the multiblock dataset if desired and can then operate on mutliple time steps at once. A time aware consumer is responsible for making reasonable requests upstream. The executive will not crop a temporal request to fit in memory. If a temporal consumer asks for a million timesteps, each a gigabyte in size, then the executive will pass the request upstream, so as with geometric extents, try to request what is needed balanced with efficiency.

Three test cases were checked into VTK. The first test case can be found in VTK/Parallel/Testing/Cxx/TestTemporalFractal.cxx. It uses the TemporalFractal class, followed by a TemporalShiftScale, TemporalInterpolator, a Threshold, then a MultiGroupGeometryFilter. Thsi pipeline is driven in a loop to create an animation. This test is run on the dashboards for VTK and has a valid image checked in for it. In this test the first three filters in the pipeline are temporal filters, the next is a regular DataSet Filter (threshold), while the fourth is a composite dataset filter but not temporal.

The second test case can be found in VTK/Parallel/Testing/Cxx/TestExodusTime.cxx. It reads in the crushed can datatset which has 43 time steps. A TemporalShiftScale is used to normalize the actual time range to 0.0 to 1.0. Then a TemporalInterpolator is put into the pipeline so that the dataset can be treated as if it were continuous. Finally a threshold filter and MultiGroupGeometryFilter are used prior to connecting to the mapper. A loop then drives the animation in even steps that do not match the original datasets timesteps. The linearly interpolated results are rendered. In this case the first filter in the pipeline was not a composite filter at all. In this case the CompositeDataExecutive loops the simple source over the requested timesteps to generate a TemporalDataSet. This required significant modifications to the CompositeDataPipeline as previously it had no mechanism to loop a source (only filters with composite inputs were looped) Below three frames (interpolated) are shown from this example.

The third test case verifies that the caching functionality of vtkTemporalDataSetCache works properly. It can be found in VTK/Parallel/Testing/Cxx/TestTemporalCache.cxx. 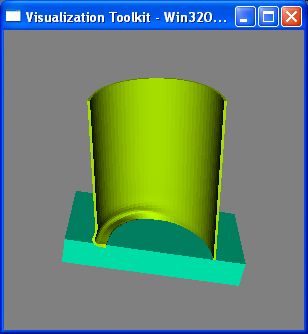 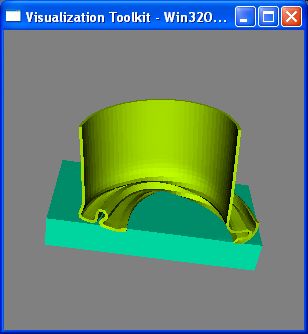